Here’s also a list of chapters you can find as blog posts on the site:

_TODO: What is a functional test?

I order to write our first functional test we needed a test page, which we built in the previous section. Now let’s set up a simple Node.js webserver. Throughout this section and in future you may find me refering to these kind of tests as Functional Tests, End-to-end, Feature tests or indeed User Journey tests. Confusing I know, I will try my best to keep it to feature and end-to-end tests, but be prepared when discussing this topic to come across the same variety of breadth of names for Functional tests.

A good practice to follow while working with Git is to create a branch for each feature that you are working on, so let’s go ahead and create a new branch for this item of work.

Since we’ll be using Node.js we can use NPM to manage the dependencies. These dependencies are stored in a folder called node_modules. Since we don’t want to check any node modules/packages into our repository we added that folder to our .gitignore file in when we set up the project. If we don’t add those packages to our repository you may be wondering how our CI and Heroku instance will now how to run the app. To that end we’ll use a handy file called package.json. When we run NPM we can not only install dependencies, we can also add them to our package.json file and our target envinronments can read this file and install these packages for us.

Typing npm init give us a way to create our package.json, here’s what I answered when prompted:

This utility will walk you through creating a package.json file. It only covers the most common items, and tries to guess sane defaults.

See npm help json for definitive documentation on these fields and exactly what they do.

Use npm install <pkg> --save afterwards to install a package and save it as a dependency in the package.json file.

As you can see it autocompleted a bunch of information for you, such as the project name, version number and Git details. Let’s add that file to our repo before going any further:

By specifying --save the dependecy was added to our package.json file, if you open it up you should see the following toward the end of the file:

Next create a new file called server.js in the root of our project and add the following content:

And to start our server type:

If you now open your browser and hit http://localhost:3000 you should once again see: 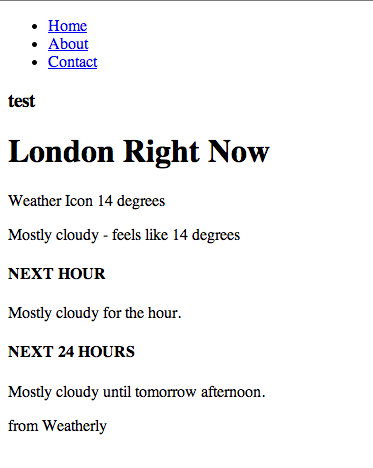 The process that runs our server is not daemonised and will continue to run until we close the console or type ^C. Go ahead and kill the server and add those changes to our repository, merge these changes back into master and finally push to origin:

For our functional tests I have chosen Cucumber.js and WebDriver.js with Selenium. I chose this combination because I believe this will give you greater felxibility in the long wrong, especially if you plan on using different languagesin your toolchain. You can find Ruby, Java and .Net versions of Cucumber, WebDriver and Selenium.

Once again we’ll create a dedicated branch for this work:

Selenium uses Java, so you will need to make sure you have it installed.

We could install the binaries manually, but since I plan using Grunt to automate tasks around starting and stopping the server, we might as well use [grunt-selenium-webdriver] (https://www.npmjs.org/package/grunt-selenium-webdriver) module as this includes everything that we need, including the jar file for the Selenium Server.

We use the --save-dev flag to indicate that we want to add this dependency to our package.json file, however only for development purposes. With that done let’s create a Grunt task to start the server (you can find more information on Grunt and tasks over at the official Grunt.js website). The first thing we’ll need is a Gruntfile.js, so add one to the root of your project and edit it to contain the following:

Save the changes and at the command line type: grunt e2e and you should see something like this:

This told grunt to execite a task called e2e and confirms that the selenium server started properly at the following address 127.0.0.1:4444 and then was shutdown again (apparently it is not necessary to shutdown the server with a stop task).

Using Grunt to start and stop the server

Let’s also add a step to stop and start our web server when we are running our frunctional tests. To that end we’ll install another grunt module:

And we’ll edit our Grunt file so that it looks for our server.js and we can control the starting and stopping of our server:

If you now run grunt e2e, you should see the following output:

The next thing we need to do is install WebDriver.js and we are then nearly ready to write our first feature test:

The final piece of the puzzle is Cucumber.js:

Features are written using the Gherkin syntax, and this is what our first feature looks like:

I like to store these and the associated code in a e2e directory under a parent tests folder. So go ahead and create that folder structure under the root of our project. Then create a features folder and save the above feature contents to a file called using-weatherly.feature.

If we were to run our cucumber tests now using cucumber.js tests/e2e/features/using-weatherly.feature we would see the following output:

You can implement step definitions for undefined steps with these snippets:

Time to flesh out the steps to do some work and check for elements on the page while the tests are running. We’ll make use of Chai.js as our assertion library, so let’s go ahead and install this module:

The first bit of code we’ll add to our tests is a World object, which willl initialise our browser (read WebDriver) and add a few helper methods (visit and hasText). As our browser we are using phantomjs, but if you would like to see the test running simply replace browserName: 'phantomjs' with say browserName: 'firefox'.

Here’s our world object (world.js), which we save into a folder called support under tests/e2e:

Please note that if when running the tests you come across the message shown below (logging in verbose mode here), this simply (indeed simply…) means that webdriverjs cannot find phatomjs in your PATH.

Now let’s re-visit our using-weatherly-step-definitions.js and replace the contents with the following code:

The first step opens the site, and then we assert that the header element displays London Right Now and that the element with our temperature shows 14 degrees

If we were to once again try and execute our feature test, we would get an error telling us that it can’t connect to the selenium server. So let’s wrap all of this into our e2e grunt task. Let’s start by adding another module to our setup:

And let’s edit our Gruntfile.js to look like this now:

Now type grunt e2e and you should see the following output:

With that done we can commit our changes to our repository:

To sum things up in this section we created a set of grunt tasks that:

We also wrote a feature test that:

You can read the full book over at GitBook or LeanPub. Updated content for this chapter can be found on GitHub.

This is my personal blog. The views expressed on these pages are mine alone and not those of my employer.